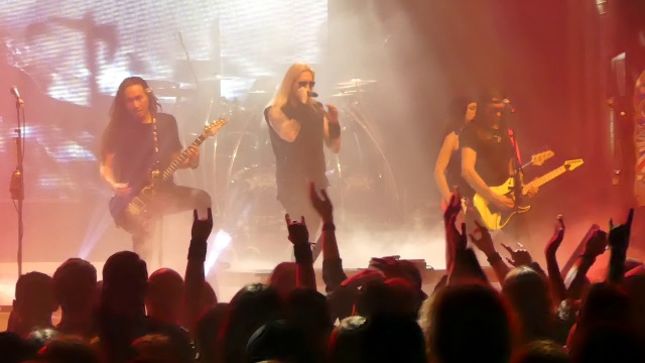 Dragonforce guitarist Sam Totman and frontman Marc Hudson recently guested on Machine Head frontman Robb Flynn’s No Fuckin’ Regrets podcast. They discuss a variety of subjects including parting ways with original singer ZP Theart, Hudson’s 10 year tenure in the band, and Totman’s five year ban from doing interviews because he “talks a lot of shit that gets us in trouble or embarrasses us.”

On Friday, March 13th, Dragonforce pulled the plug on their North American tour, issuing the following message to the fans:

“Due to local legislation and concern for our fans’ health, we will be postponing all upcoming dates of our spring US tour, starting with tonight’s show in Minneapolis. Hold on to your tickets, we will have rescheduled dates announced very soon. In the meantime, please everyone take care and stay healthy!”

Prior to the tour, Dragonforce announced that drummer Gee Anzalone would not be performing on the US tour. According to the band, “Gee has been hospitalised for Myocarditis, an inflammation of the heart muscle. Virtuoso drummer Aquiles Priester (Angra, Tony MacAlpine) will perform on the upcoming Dragonforce US Tour while Gee recovers.”

Guitarist Herman Li said, “We will miss our brother Gee on the upcoming US tour, but health is most important. We wish Gee a speedy recovery and we know he will be back on tour with us soon. We want to thank our friend Aquiles for stepping up and helping us out on short notice.”

Fan-filmed video of the band performing their first show of the tour,  in Phoenox, with Priester behind the kit can be viewed below.

The Weeknd’s ‘After Hours’ Album Off to Fast Start

Sun Mar 22 , 2020
The Weeknd’s new album After Hours is off to a hot start, according to industry forecasters. Those in the know suggest it could earn over 400,000 equivalent album units in the U.S. in the week ending March 26. That forecast could grow higher, as it is based off just two […]